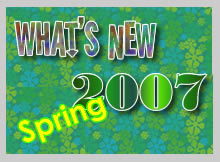 We’re right on spring and due to lots of pre-arranged shows, we haven’t take the time to talk and show what’s going on in music this year. We haven’t hear the killer track or album yet, but the year seems promising, with good bands and albums. Hope there will be tons and tons of music this year.

Great guitars and instruments, great voices, in this track, Ali Farka (who didn’t want his son to be a musician) supports his son in this beautiful track filled with african and bluesy vibes… The best way to describe it is to feel it… yes… feel it!

Some people think this canadians sounds like The Arcade Fire… the thing is they don’t. The only thing in common is they both are from Montreal and the leaders are married. That’s all. This is some melodic post pop, post rock brilliantly done. Although we wanted to air the more energetic “Devastation”, “Raids The Rails” is so beautiful, it’s worth it… we have plenty of time during the next months to show you more from this band.

The opening track for a great album. Lot’s of people including our own Chuy praised their last album. Just wait and hear this one… fantastic. A fine piece of bombastic pop… or maybe post pop as well… And yes… hear the difference with The Besnard Lakes.

This album has more electronic elements supporting the old 60’s voices harmonies of the band. The results are… well you’ll have to listen. We choose the final track, like it very much…. But like The Sunladic Twins a lot more…

One of the best albums this year… hard to decide on one track only, hope we can air “Plasticities” soon. Just hear Bird (yeah! we knew he could do things like this and changing his songwriting to this more pop kind of music in the last 3 albums has made Bird a very sophisticated pop – post pop artist… great) whistling and string picking his violin on this nice track.

Terrific album… maybe the best one aired this night… hard to tell, too soon to digest so much music. But Wilson… is Wilson. The duo delivers their second album after some months recording in Israel. The product and sound -as always- is superb. This is some kind of melancholic track, the final one, full of string arrangments. Some kind of symphonic progressive pop. Übercool.

Hope to have the track before the show. El grillo is going to be with us (hopefully) telling us about the album. I have just sampled it…sounds great, although maybe not their best, but good…

Shhyeeahh!! Almost 15 noisy minutes of pure post rock from the texans. Good album, but this tracks is soo good, the rest of the tracks seems overshadowed by it (well, not really… but believe me… this one rocks!) …. Only the title alone rocks! Be prepared fore some kind of extasis…

Irish band, making what they do best… dramatic vocals -in this case- over a soft slow melody. Sounds great, and the voice is very catchy… nice snowpatrolish mood.

Interesting sounds, full of ambient pre-recorded noises, in a very long and melodic pop track. This sounds great and at the same time somehow experimental. Great!